Since the inception of operation (March, 1992) the staff at the University Area Joint Authority has strived to meet and surpass the Board’s directive of achieving excellence in compost operations. 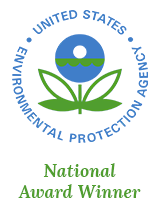 All of the efforts put forth by the Authority’s staff and their consultants has paid off. The first organization to recognize the excellence of University Area’s achievements was the Pennsylvania Water Environment Association (PWEA). In June, 1996 the PWEA awarded the University Area Joint Authority its 1996 award for Beneficial Use of Biosolids from a large operating project.

The staff at the University Area Joint Authority felt good about their chances for receiving an award from Region III of the U.S. Environmental Protection Agency. An application for the 1997 award was completed and forwarded to EPA Region III in Philadelphia. Region III was so impressed by University Area’s achievements, the application was forwarded to Washington, D.C. for competition in the nationals. In October of 1997, UAJA was presented the U.S. Environmental Protection Agency’s national award for the beneficial use of biosolids from a treatment facility operating at less than 5 million gallons per day. The Board’s directive to achieve excellence had been fulfilled!

Learn more about UAJA ComposT and how to use it.

UAJA is the municipal authority providing Wastewater Treatment, or Water Recycling services, to much of State College and the Centre Region.

We're not around right now. But you can send us an email and we'll get back to you, asap.